What would a Scottish kindergarten stage for under 7s look like? 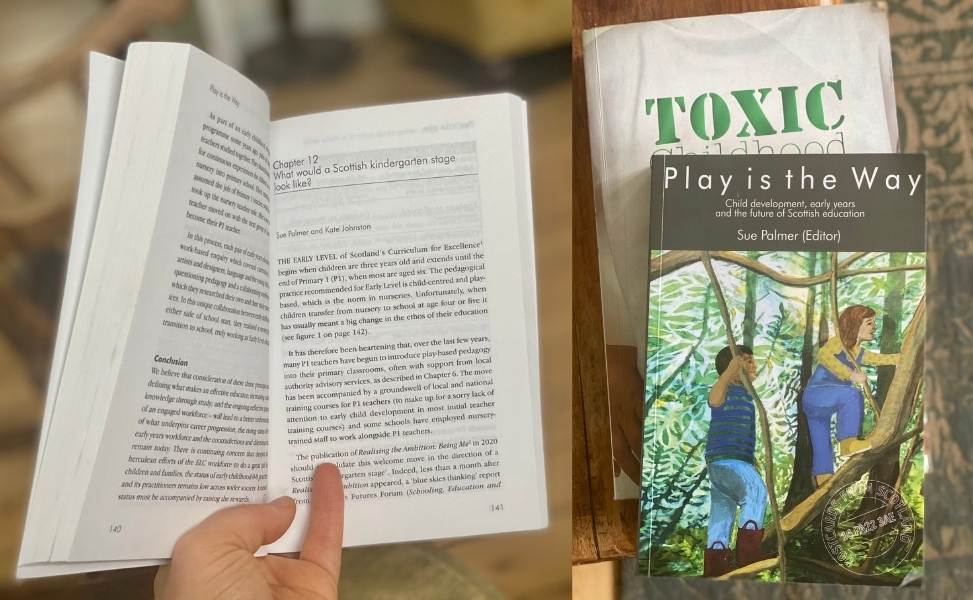 Play is the Way, from grassroots campaigners Upstart Scotland, is receiving great acclaim from political commentators, academics, early years practitioners and parents alike. A successful crowd-funding project put a copy of it in the hands of each and every MSP and local authority Directors of Education. It has been flying off the shelf so quickly, it is now on its second print run, with an additional chapter on equality and diversity being added for the third edition. And now the campaign has the backing of the Scottish Green party, who has added it as one of their first major policies in their manifesto ahead of May’s election.

Engaging stories, sharp science and critical analysis all in one short volume’ notes writer and broadcaster Lesley Riddoch. Jackie Brock, CEO of Children in Scotland commented: “In years to come, when Scotland considers with pride its early years approach, we will point to this book to understand how we achieved it”.

With special permission from Editor, Sue Palmer, we include an abridged extract from the book below from Chapter 12, linking to the full chapter. It recognises many of the important founding principles offered by Steiner Waldorf Kindergartens around the world. The Edinburgh Steiner School is a small independent school for up to 360 pupils aged 2 – 18 years, which has been offering the internationally recognised Steiner Waldorf curriculum in the Capital for over 80 years.

The pedagogical practice recommended for Early Level of ‘Curriculum for Excellence’ is child-centred and play-based, which is the norm in nurseries.

Smooth transition from nursery to school

Unfortunately, when children transfer from nursery to school at age four or five it has usually meant a big change in the ethos of their education.

This is a considerable social and emotional upheaval at that age. There are obvious benefits in abandoning the highly disruptive physical transition from nursery to school the year children turn five.

Importance of education in early childhood

When children spend three to four years in the same setting there is time for observation, identification of problems and the provision of early therapeutic support. Chapter 9 describes how Finnish EY practitioners identify many additional support needs during the kindergarten stage. Then, working with parents and specialist therapists, they offer targeted support as early as possible, so that developmental problems are ameliorated or (sometimes) even solved before children start school. Indeed, for many the simple ‘Gift of Time’ would mean that additional support needs never develop.

Many of the advantages of what Upstart calls ‘a Nordic-style kindergarten stage’ relate to the biological needs of children during this extremely formative stage of their lives. As pointed out in Chapter 2, the centrality of outdoor play and learning to a kindergarten ethos contributes to children’s all-round development and long-term physical and mental health.

The mixed-age ‘vertical grouping’ is another advantage from the perspective of evolutionary biology. Since time immemorial, young children’s emotional and social development has been advanced, not only by their interactions with caring adults, but through play (especially outdoor play) with other children. Three-year-olds have always learned by watching older friends and siblings, and six- and seven-year-olds have always grown in confidence and competence by helping and taking responsibility for the little ones.

It takes a village to raise a child

And, finally, it takes a village to raise a child. As all our scenarios show, a kindergarten stage is the 21st century version of the proverbial child-rearing village. Nowadays, professionals care for children while parents are at work but every community still feels its inevitable responsibility to the next generation. In our experience, parents, grandparents and other adults in the local area are usually eager to help improve facilities for this age-group, and give local young children ‘a good childhood’. The establishment of a kindergarten stage provides the perfect focus for community involvement and regeneration.

Read the chapter in full here: What would a Scottish kindergarten stage look like? by Sue Palmer and Kate Johnston

Buy the book: Play is the Way

Visit Upstart Scotland to read more about the science behind the campaign for a statutory kindergarten stage for all under 7s living in Scotland.

One of Upstart’s supporters founded Give Them Time, a grassroots movement campaigning for a further year of nursery funding for all children legally deferring Primary One start in Scotland. Edinburgh Steiner School officially  supporters the campaign. Deadline for deferral for 2021/22 is 28th March, 2021.

Political support for a kindergarten stage for under 7s

In 2018, the Scottish Liberal Democrats called for the school starting age to be raised to 6 or 7. On Monday, the Scottish Greens announced a key part of their manifesto for this May’s parliamentary elections: Children should start school at seven years old.

In November, Trevor Mepham, Principal at the Steiner Waldorf academy in England – the first publicly funded Steiner-Waldorf school in the UK interviewed the founder of Upstart Scotland, Sue Palmer.

This talk is still available to watch. View the event here: Play is the way: talking about young children and their young lives

Learn: For life, from life and throughout life