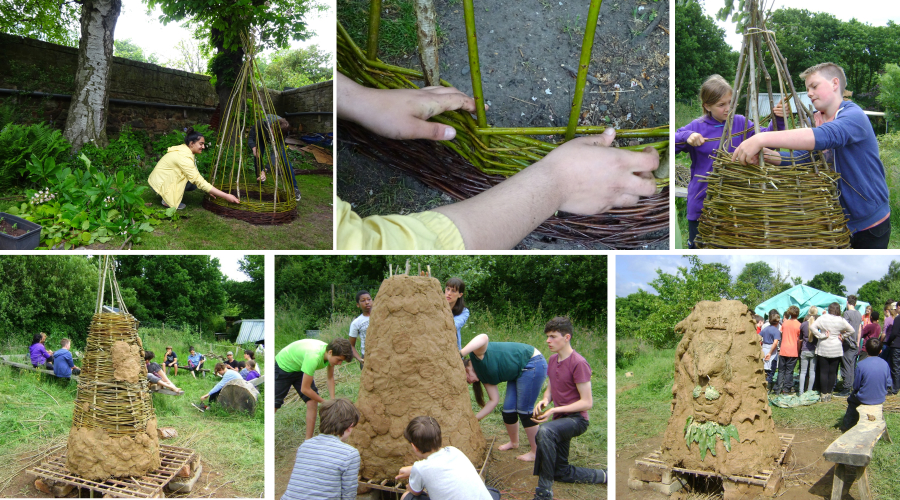 Class 7 have taken their chemistry classes outdoors. Working together to create a basket weaved from sticks to create a chimney, they then headed to the Pentlands to dig clay in order to create a batch of cob mixture, with straw and sand to build a primitive lime kiln. Using the wattle and daub composite building method, the wattle (woven basket) is daubed with the sticky material (cob mixture).

In Waldorf Schools a kiln is typically built during the Chemistry Main Lesson in the Lower School to demonstrate the archetypal chemical process of transforming calcium carbonate into quicklime. Wattle and daub has been used for at least 6,000 years and is still an important construction method in many parts of the world. Many historic buildings include wattle and daub construction, and the technique is becoming popular again in more developed areas as a low-impact sustainable building technique.

The experiment requires that calcium carbonate (substances such as limestone, marble, sea shells, & chalk) are burned in a kiln where the temperature reaches above 1000°C. Limestone is a unique mineral because it’s derived from the animal kingdom, and the process of burning it is very similar to those used to make lime mortar, which is a building material, and lime milk, which is used in fresco paintings.  The use of lime-based mortars have become increasing important in building conservation, as their environmental credentials are far higher than cement, as they actually absorb C02 from the atmosphere, whereas cement gives off more than it absorbs.

Historically, the scientific method is taught by the teacher or the text book, wherein a hypothesis is presented and the students are told to prove it. This method is linear, has predicted results, and does not stimulate everyone. Physicist Victor Weisskopf objected to this sterile approach when he said, “Science is not flat knowledge, formulae, names. It is curiosity, discovering things, and asking why. . . . We must always begin by asking questions, not by giving answers.” And he adds, “You can teach only by creating interest, by creating an urge to know” (Waldorf Chemistry). Nobel Laureate, and Waldorf graduate, Thomas Sudhof echoes Weisskopf’s point at the Waldorf 100 celebrations in Silicon Valley:

I am very honored to have been a Waldorf school student. I think I learned a lot of what I accomplished in the end as a student…I think that, in the development of a child, implicit learning comes before explicit learning. And thus, I think that the emphasis in Waldorf education on implicit learning—on the arts, on things that you do manually, on language—is actually a very good thing because that emphasizes the strengths of the child during that stage of development.

That doesn’t mean one shouldn’t start some explicit learning early on, but I believe one shouldn’t emphasize it. One can still learn things like math and physics in later years in high school, whereas in early years during elementary and middle school, you can learn skills, like in music or language, that are much more difficult to pick up later.

And so, in my own experience, I actually learned virtually no science before I came to high school because that’s the way the Waldorf school curriculum was. I don’t think it has hurt me.

And I think that it’s more important to develop the strengths and the individuality of the child, and to develop things like language and art in early times and then to move on as the child develops and teach them explicit skills later on.

Extract from keynote speech by Dr Sudhof, joint winner of the Nobel Prize in Medicine (Neuroscience)

Building on their experience of making the lime kiln, the 12-13 year-old pupils came back to campus to work together to make a pizza oven that the Class will then use throughout the next academic year to fund-raise for their Class 8 foreign exchange.

The desired shape of the oven is created with sand. Next, a mixture of sand and clay, combined using bare feet, is moulded into similar-sized bricks, and built up around the sand shape to create the walls. This process ensures the thickness is even throughout, so as to avoid weak points. Whilst still wet the blocks are then smoothed together. Once the first layer is on, a second round is undertaken, this time adding straw to the sand and clay material.

The class complete the process by adding a layer of lime plaster to the structure. Finished, it will be used in the next academic year to clay-bake organic pizzas, sold for £1 every Thursday lunchtime; prepared, cooked and sold by the pupils. The structure is now being left to dry slowly and thoroughly over the eight weeks of the summer holidays, giving it strength and avoiding cracking.

Class 8 acts as a transition year before the pupils enter the Upper School. They will meet basket weaving again as a Main Lesson, brought in to the curriculum to balance out the academic study. They also have a main lesson in Organic Chemistry (Class 9), Inorganic Chemistry (Class 10) and the History of Architecture (Class 12).

Returning from the summer holidays, the now Class 8 pupils complete their clay oven, using it to clay bake their organic pizzas, which they sell to Kindergarten children and parents every Thursday.