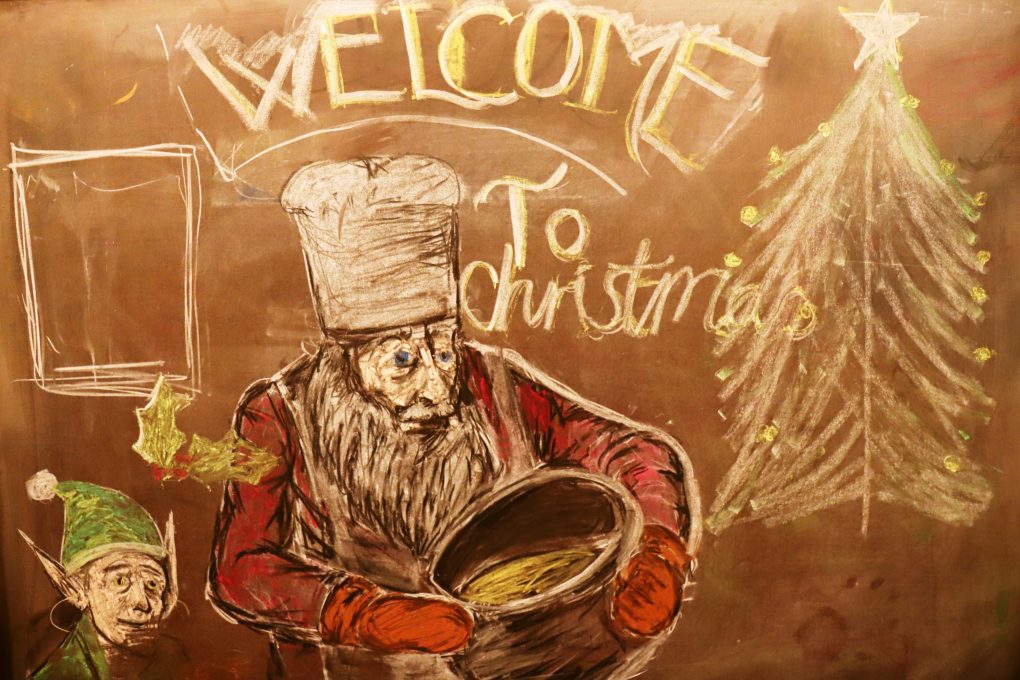 Following tradition, Edinburgh Steiner School prepares to welcome thousands of people through its gates this Saturday for its annual parent-organised Christmas Market. 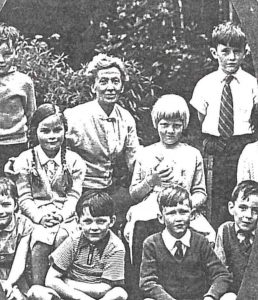 In 1955, parent Dorothy White, along with a trustee and a teacher, took the modest-sized Christmas Market from the School grounds to town, hiring the Assembly Rooms to host a festive market that would showcase the School’s creative richness. It grew from there, offering an antidote to the commercialism that often surrounds this time of year.

It is a quadruple milestone year for the School, with this weekend’s event rounding off a year of celebrations. In May it hailed eight decades of providing an important alternative to mainstream schooling in Edinburgh, based upon the principles of the internationally recognised Steiner Waldorf curriculum.

Still the largest and fastest growing educational movement worldwide, the School shares its anniversary with the centennial of Waldorf Steiner education globally. Dr Rudolf Steiner started the first school in Stuttgart for the children of the cigarette factory, Waldorf Astoria in 1919.

There are now more than 1,090 schools and 1,857 Kindergartens in some 80 countries, plus many teacher-training centres. Edinburgh Steiner School, situated within a conservation area of the Capital, is one of the oldest Steiner Schools in the UK; and now the only one north of the border.

Louisa Dorothy Cooper White, commonly called Dot, deserves a special place in the annals of the School as the first parent to put the name of her son, Denis, on the register of enrolled pupils. Her name heads – as the only lady – the 1947 Memorandum of the Association of the Edinburgh Rudolf Steiner School Trust, a body of seven parents “who shall remain in office until death or retiral”. And this trust in the education she held for life, peacefully passing away in 1990.

Having signed as ‘housewife’, the School knew her to be a woman of many wide-ranging interests, talents, accomplishments and achievements, becoming a teacher in the School a few years after taking the Christmas Market to the heart of Edinburgh. The annual Market is now a staple of Edinburgh’s cultural experiences during this festive season. 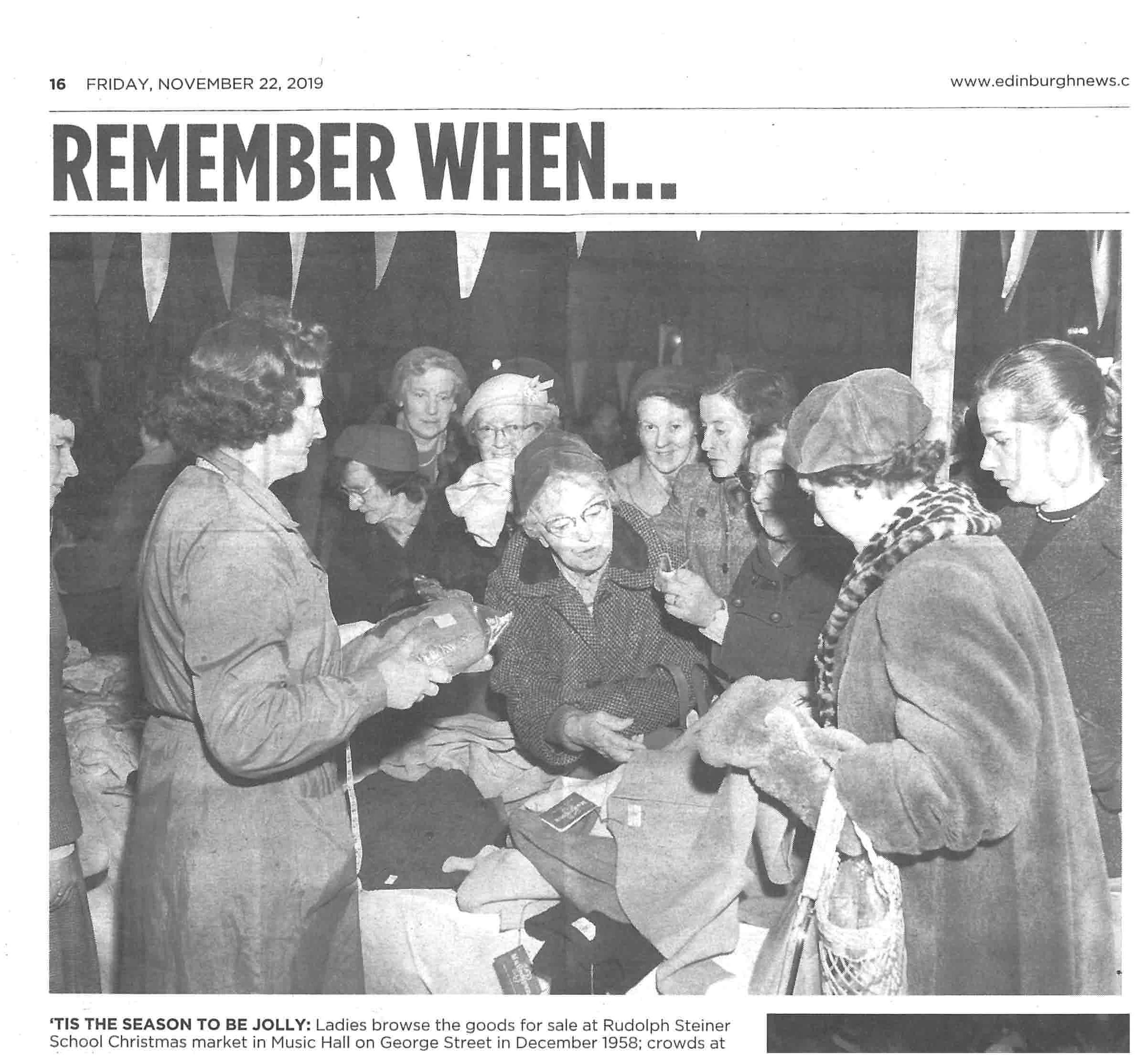 Returning to Spylaw Road some years later, it attracts more than 2,000 family, friends, neighbours and the wider community through the campus gates in Merchiston.

As a not-for-profit for the advancement of education, the School marked the Centennial as an occasion to further develop Waldorf education for our time by becoming one of the first centres for the delivery of an innovative suite of new qualifications. They are the product of a 3-year international education project, Acknowledging Creative Thinking Skills (ACTS).

The ACTS project is supported by Nobel Prize winner (and Waldorf graduate) Thomas Sudhof, Mark Runco – Psychologist and world-renowned Creativity Expert and Michael Brookes – Physicist and author of ‘Invest in Minds, Not Maths’.

A Crisis in Education

“A crisis has been looming in education for a number of years. The current system of testing has antiquated roots going back to the 19th century and is increasingly failing to meet the real needs of the students, higher education or the workplace. (p12)

“There is a growing need for creative solutions to meet an ever increasing array of social, political, economic and natural challenges, from disaffected youth to climate change, and yet there are fewer and fewer opportunities for students to practise the necessary skillset they will need within the current assessment system” (Ibid) says Elaine Holt, who devised the ACTS programme; stressing: “We need to make an investment of effort now, so that they will have the inner tools that they need to meet these challenges”.

The qualifications, offered through Crossfields Institute, facilitate meaningful creative thinking in a format that for the first time translates the Steiner approach to learning into physical qualifications which can be measured alongside their exam-based mainstream counterparts.

The educators aimed to find a way to raise attainment, reduce early school leaving and make education more inclusive through the integration of formal, non-formal and informal learning.

Both the international IE Certificate for 14-16 year olds (equivalent to two G.C.S.Es) and IE Diploma for 16-18 year olds (equivalent to two A Levels) develop a spectrum of creative thinking skills through a cross-curricular approach to equip pupils to access higher education, employment and entrepreneurship. Learning outcomes are assessed through a portfolio of evidence, with no exam.

Based on the Waldorf Steiner holistic approach to education – something which Curriculum for Excellence (CfE) has been striving to achieve since 2016 with its suite of CfE exams – they offer an alternative educational passport to further education and work to standardized testing.

Introduced at a time when the Scottish education system is seeing subject choice being squeezed, with worrying downturns in some key subject areas; and a fall in Highers attainment for a fourth consecutive year, the Integrated Education suite has the potential to put Steiner education at the center of high school educational debate for a second time in a decade in Scotland. (Read the motion S2M-3117, in the name of MSP Mike Pringle, on the benefits of dialogue between the Steiner and mainstream education sectors here).

“We successfully piloted the first of the Integrated Education qualifications with our 13-14 year old pupils alongside their normal timetable, marking this milestone year” says Development Executive, Sarah Miller ahead of the School’s largest fundraising event.

Edinburgh Steiner School is one of ten independent schools which are fee-paying; with the independent sector educating one in five secondary pupils in the Capital, according to the recent Biggar Economics report published earlier this year. This compares to SCIS figures showing 5.8% of senior pupils Scotland-wide are receiving fee-paying education.

“Like every nonprofit, Edinburgh Steiner School Trust depends on the philanthropic support of the people who care about our school and our mission. And like every independent school, tuition alone does not support everything we do to educate the children of our school” says Mrs Miller; adding: “Our Upper School fees are lowermost in the sector for Scotland”.

She goes on to say: “We are also investing significantly in the cultural heritage of the city. At the beginning of this year we broke ground converting a 19th Century C-listed coach house into 21st Century classrooms for the senior pupils of our School; a £0.5 million project made possible by legacies left to the School. This building will be hosting several of the Christmas Market activities this year.”

The building won an international accolade for its community construction by Architectural MasterPrize last month, designed by Benjamin Tindall Architects. Completed on time and on budget for the start of this academic year, many pupils, pastoral teachers and parents were involved in the design and build of the project.

Founder Rudolf Steiner was an architect as well as a pioneering educational philosopher and his impressive Goetheanum in Switzerland has been listed amongst the most significant works of modern architecture. He understood pupils are profoundly affected by their built environment throughout their educational career; with Walforf Steiner schools worldwide adopting a remarkably consistent child-friendly architectural ethos.

Maintaining financial sustainability is of crucial importance to the School as it allows it to fulfill its core role of providing education to pupils and enables it to undertake additional activities, such as the recent pilot of Integrated Education, now on the Ofqual-register.

Cartmell says of her decade long Steiner education: “My time at school provided me with an incredibly broad education and understanding. It has helped me to be able to look at things differently and provide alternative perspectives to challenges. Above all though, the school helped provide me with the confidence, self reliance and motivation to keep going.”

In response to someone asking whether he was educated with the Steiner method, Heughan tweeted: “Yes I was. Very lucky.”

Watson has spoken of his ‘Rudolf Steiner’ education over the years, saying it developed his creativity. When asked: Did your schooling at the Rudolf Steiner School in Edinburgh affect your creative development in any way? by Shotkit, you can hear a recording of him replying: “It certainly did. Rudolf Steiner schools have this particular way of teaching. They try and bring a creative, artistic way into everything – writing, reading, mathematics, the sciences. They bring a lot of creative thought into the teaching of those various subjects. I think it did have an effect on me, yes.” His exhibition Frozen in Edinburgh included a school class photograph of himself and future wife sitting together aged five,  being the first image visitors saw as they entered the City Arts Gallery in 2006.

Fundraising efforts are now underway to raise a further £500,000 to carry out vital repair works to the conjoined west coach house, converting it into the much-needed twelfth full-sized classroom, and build an extension to the science wing, to facilitate pupil numbers to grow.

The annual Christmas Market hopes to raise £50,000 towards the Growing Spaces campus development project over the coming years, and has already allocated over half of this target from previous years’ proceeds. These efforts have been joined by a gift of £50,000 from the literary estate of Charles Kovacs, a former teacher and author of books published by Floris Books, as well as a community loan of £50,000 offered by the trustees of the Anthroposophical Society in Edinburgh, whose treasurer is the son of Dorothy White and the first ever pupil of the School, joining in 1939.